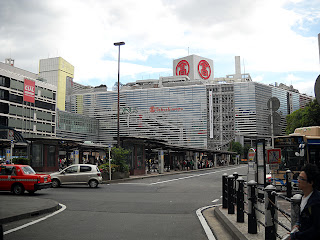 Some time late last year, my husband and I ventured to an area we hadn't been to before and he suggested we walk to the local train station to see what was happening around there. The answer was "nothing". Later, we went to another one that he had been to before and recalled had sold some souvenirs and whatnot. As we approached the building, I actually felt a little excited. Once inside, I discovered it was one little display of souvenirs and a sad little snack shop. At least where I am, there is pretty much nothing going on around train stations. They are dismal, isolated little spots which have no color or interest.

The essence of taking something for granted is that you don't really appreciate it until it is gone. Such is the case with the station shopping malls. Sure, I liked them. It was especially fun to spend part of my lunch hour when I was working wandering around to the myriad little shops that tended to occupy all of the spaces around and under the various JR (Japan Railway) stations.

I truly miss the variety and quantity of shops that I could easily find at most Tokyo stations.
Posted by Orchid64 at 8:00 AM