Will Miss #21 - not carrying a purse (reflection) 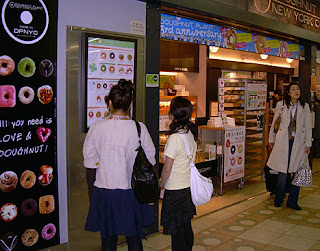 This was something which I didn't think much about it when I was in Japan, and it did make sense when I speculated on it, but I've found that it is absolutely true that I didn't need a purse then, but I do need one now. The old backpack served me very well when I was dealing with public transportation and schlepping around Tokyo, but I find that I need a different type of gear here.

First of all, outside of a college campus, you look strange with a backpack in the U.S. This is because everyone has a car and they use it as a repository for their crap. Second, I seem to need a lot more incidental "stuff" here than I did in Tokyo. A big reason for this is that there were convenience stores pretty much everywhere. If I really wanted or needed something, I knew I could pop in and pick it up. There were also vending machines everywhere so I could get a drink if I was thirsty. Here, I have to keep everything on hand because it's a lot more trouble to find the right store, park the car, check out a single item (when everyone seems to be buying half the store when they're there), and drive away. Having the car not only makes the process take more time, but it also means that it's such a hassle that I'd just rather laden myself with every possible option than make the effort. There was a casualness to the lifestyle there which I cannot easily embrace here.

I miss the way in which I was good to go with my backpack and "living off the land" in Tokyo. I have a small bag that I carry, but the truth is that I realized a long time ago that I need to procure a proper purse rather than keep stuffing that poor thing to the top (I've already lost things that fell out of it).
Posted by Orchid64 at 9:26 AM