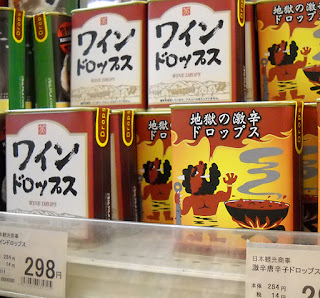 Wine candy? Sure. No root beer barrels, though.

Life is full of tiny little pleasures. In fact, if you can focus on those, you will be a much happier person in general since the small ones come along so often and the big ones so infrequently. Growing up, my family used to go to an A&W drive-in restaurant (now long out of business) and root beer is an old-fashioned pleasure. It's so associated with innocent American upbringing that the writers of the Star Trek: Deep Space Nine series made it the unofficial beverage of the United Federation of Planets. In some fictional future, root beer is the drink of choice among young cadets hoping to travel into space.

In Japan, my husband and I used to buy the occasional case of root beer from the Foreign Buyer's Club and on rare occasions, we'd share it with students. Universally, they felt it was the most vile thing ever. Sassafras is clearly an acquired taste, and the Japanese can't acquire what they have no experience with. There is nary a root beer barrel candy nor a can of root beer in sight in Japan unless it has been intentionally imported for the foreign market. I won't miss the fact that root beer is uncommon in Japan.
Posted by Orchid64 at 8:00 AM