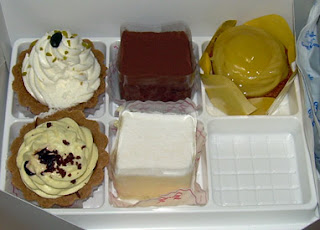 As people get older, their taste buds are supposed to weaken such that they can't taste things as they could when they were younger. That's why they supposedly start to like strong-tasting food like Limburger cheese, brawnschweiger, raw onion, and mustard. I believe that, while it is true that people's taste buds change as they age, I also think that we build can obliterate the sensitivity of them by eating things which are too intense all of the time. There's an extremely inappropriate equivalency statement that I could make about women who use devices to pleasure themselves, but I won't state it outright. Those who are dirty-minded will get it, and I shall refrain from sullying the minds of those who are pure and clean of thought.

The thing I have realized since returning to the U.S. is that years of eating Japanese food have left my taste buds relatively sensitive to certain things. One of those things is sugar. I find it very hard to bear a lot of sweets in the U.S. because they are overbearingly sugary. Sugar and salt here obliterate the flavor depth of many of the packaged foods I might try. The truth is that, though I said I wouldn't miss them, I do miss those pretty, but bland pastries. They weren't very sweet, but at least I could taste the flavors that were in them because they weren't "flavor-blasted" out of existence.
Posted by Orchid64 at 8:00 AM