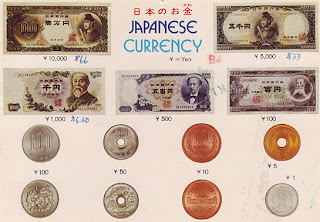 One thing that I was aware of long before I left Japan was that the emphasis in America is largely on money. Your value as a person is determined by your ability to earn cash. Your value to the family is determined by what you bring to the bank account or what you take away. An acquaintance, whose family of origin is from a Middle Eastern culture, said that, there, family was most important, but in America, money is. Though that is not always true, I have seen plenty of families who value their material wealth more than their family relationships. While that can happen in many cultures, it happens more often here. It's not just about relationships though, people judge you by your job and how much they believe you are paid. Tell someone you are an engineer or a computer programmer and they respect you. Tell someone you are working in social services and they will not, even though you are working to help people in need. It's not about what you do. It's about how much you make.

Though Japan is also a consumerist culture, the core of the culture is not about earning potential. I miss the fact that there is less (don't read that as "no") emphasis on money in Japan than in the U.S.
Posted by Orchid64 at 8:00 AM