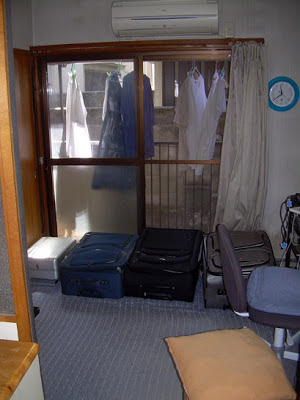 This was our living room within days of our departure from Japan. Four suitcases were all we took back with us. We didn't ship anything. It was just 4 suitcases. Here is what it looked like before we started tearing it apart.

My husband and I lived in Tokyo for 23 years and we did not move once. It wasn't because we had a great landlord, though we did. It wasn't because we liked our apartment, though we did. It was mainly because of "location, location, location". More than ever, in Tokyo, where you live has an enormous impact on your quality of life and I don't mean living around a bunch of trees or near a park, at least not in our case.

One of the things that we were happy about living where we did in Asagaya was that it allowed for a very short commute to Shinjuku and both my husband and I spent the majority of our time in Japan working there. It was 12 minutes on the subway or 9 minutes on JR. Though we had to walk to the stations, the total commute time was never more than a half hour even with all of the walking. Very few people are blessed with such short commutes and it has an immense impact on quality of life. Time not spent being jostled about by strangers on a super crowded (and often super hot) train is time spent relaxing in the comfort of your own home.

Many of my students and coworkers endured extremely long commutes, sometimes as long as 90 minutes one way, in order to have a different lifestyle. Sometimes, they lived with their parents (generally in the case of office ladies) and sometimes with their families in houses they could only afford to buy if they lived in the outer suburbs (like Saitama).

While I didn't begrudge them these choices at all and certainly empathized with the economic realities, sometimes I felt that they would have been better off getting smaller places or paying a little more and living closer. That being said, the way that Japanese companies move around to different offices or shuttle employees out to different offices makes picking a location and living in it permanently very difficult. If you want to buy a house, you pretty much have to accept the high likelihood that you're going to end up commuting for a fair amount of your free time on weekdays sooner or later.

Moving has been much on my mind lately because I've done it 5 times over the last year after not having done it for an extremely long time. It has been one of the most exhausting and difficult experiences of my life and I don't even own that much stuff. Compared to most people, we live a spartan existence. We only own 7 pieces of furniture(kitchen table, desk, sofa bed, printer stand, corner shelf, rolling coffee table, dresser) and 4 chairs (2 office, 2 kitchen). Most of our packing involved kitchen implements and various necessities as well as what few mementos we brought back from Japan. Yet, even with so little, it's an arduous task moving around so often.

After all of the hassles of moving, my husband and I thought about what it would have been like had we decided to move in Japan. The truth is that things are done rather differently there. Most of the time, people just pay a service to come in and do everything for them, at least in the big cities. Here, we've borrowed a moving truck to put our furnishings in public storage while we reside in a furnished place for the next 3-4 months and done all of the work ourselves. We've also loaded up our small car and ran back and forth between places.

In Japan, this would never be done this way because most people don't own cars and it would be very hard to manage the logistics (parking, carrying furniture though narrow doors and corridors without taking out a door frame). Also, frankly, I'm not even sure if public storage exists for private individuals in Japan. It probably does, but not at the rates or at the same volume as it does here. I see public storage facilities all over the place in northern California. I don't know if everyone is moving most of their worldly possessions into temporary storage like us, but I doubt it. I think most people are storing the overflow of crap they can't keep in their cluttered homes into another space because it's relatively cheap and plentiful.

I didn't really need a reminder of how lifestyle is dictated by surroundings and economics rather than by true choice, but moving so much since we got here and moving so little in Japan gave me one anyway. You can have more here in America because it doesn't cost much to have more. You can move here more often because, though it is incredibly hard and exhausting, it doesn't require nearly as much money. That being said, I still miss my life and lifestyle in Japan and the ease and lower expense of certain experiences in here don't really make me miss it any less, but those are thoughts for another day.
Posted by Orchid64 at 8:00 AM