Tokyo Disneyland is now 30 years old. This is a 5-year anniversary guidebook that I received. The math tells you that, indeed, I am quite old.

There are people out there who are absolutely bonkers for Disneyland. I'm not sure what the appeal is, but the place really does something for them. They'll post pictures of themselves next to staff members in costumes of Minnie, Mickey, or Goofy, or all three of them. Emotional attachments are made to the food or the attractions. What is most puzzling is that you've got people who are 50 years old who are willing to wait in phenomenally long lines for a chance to ride some less than exciting rides or see things they've seen dozens of times before.

The magic of Disneyland has always escaped me. When I was a kid, there was a T.V. program called "The Wonderful World of Disney". It showed Disney movies that were once shown in theaters or old television shows that they had produced from the 50's and 60's. My sense of Disney was related entirely to these moldy oldies that were on at 7:00 pm on Sunday nights and the somewhat dazzling opening sequence which featured an animated Tinkerbell flying around Cinderella's castle. I'm not sure I even was aware that Disneyland or Disney World existed when I was growing up. I certainly never aspired to go there.

When I met/visited my boyfriend in Tokyo for the first time in the spring of 1989, he planned what we were going to do with our month together. He had been there for around eight months and hadn't done much in the way of sightseeing. Most of his time was spent working, record shopping, and talking to or listening to me on cassette tapes. Part of what he planned for us was to see KISS in concert at Budokan. Another was a trip to Nikko to see temples, because you have to see temples in Japan. And, we planned to go to Tokyo Disneyland. 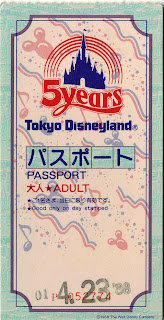 I didn't approach any of these plans except the KISS concert with any degree of anticipation or with any particular expectations. I didn't really care about the itinerary. I just wanted to finally spend time with him in person. The rest wasn't so much "gravy" as side dishes that I didn't give much thought to. 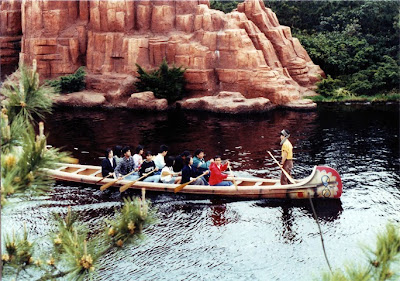 The truth is that I do not remember much about what we did at Disneyland and, when I look at some of the pictures of us doing activities, I don't recollect the experiences at all. Most of what I know actually comes through listening to tapes sent contemporaneously to my husband's parents. He told them about my visit and relayed a particular story in which he and his brother stood in an area high above a group of Japanese visitors in a canoe who were rowing. They were rowing in time to an employee who kept saying, "ichi-ni, ichi-ni (one-two, one-two)" in order to guide their strokes. My boyfriend and his brother yelled down at the canoe, "san-shi, san-shi (three-four, three-four)" as a joke. As is so often the case, the Japanese took the goofy foreigners in stride and gamely smiled and waved at them for their efforts. 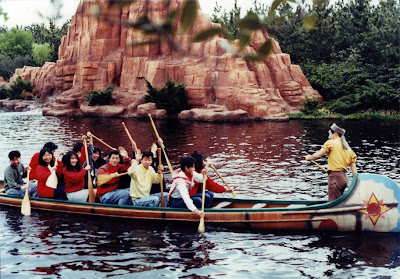 Ah, they were so friendly and tolerant.

The interesting thing about this experience as I reflect back on it is that this is the sort of thing that we would not do by the time we left Japan. Part of the joking around was youthful behavior. We all do silly things when we're young, and, in this case, at least it was good-natured and the Japanese saw that. However, I do believe another part of it was that this early time in Japan was one in which our perception of life there was that it was somehow less "real" than life back home. We were either indifferent to or oblivious of any consequences of how we were perceived in public. That being said, and this is certainly true, it really did not matter what we did because we would always be stared at anyway. Perhaps yet another part of it was that it was easier to be a big goof in public when you knew you were going to be seen as a weirdo anyway.

Other than this story, I only vaguely recall a few things that we did. I knew that we rode the sorry little train that takes you through some sort of jungle area with animatronic animals and other bits and some models of the American West and that we rode Space Mountain. I also know from a tape that I made to a friend, but never completed, that we saw Captain Eo, but we apparently spent the entire movie groping each other in the security of the darkness.

Despite the vagueness of my memories, Tokyo Disneyland was to end up occupying a special place in our personal history. That is not to say that we suddenly became fans of Disneyland or went there on yearly pilgrimages. The truth was that we went only twice, in spring of 1989 and late winter of 2013.

It became a touchstone for the beginning and end of our life in Japan. The reason for this was that, on both occasions, my then-future, now-current brother-in-law was with us and he is a very good photographer who took a lot of pictures of us while we were there. There are more pictures of us together at Tokyo Disneyland than at any other event excluding our wedding (though the count may be pretty close). These pictures reflect how joyous we were being together after such a long and difficult separation and how incredibly in love we were/are. They're very romantic and loving, and we returned there in 2012 to recapture some of the classic poses from our initial visit. We have a "then and now" comparison of two pictures in the same spot in roughly the same pose. The pictures represent bookends to our time in Japan. Tokyo Disneyland unintentionally became a very special place for us, not because of its attractions or cartoon characters or atmosphere, but just because it was the photographic backdrop for the beginning of our in-person relationship.
Posted by Orchid64 at 8:00 AM