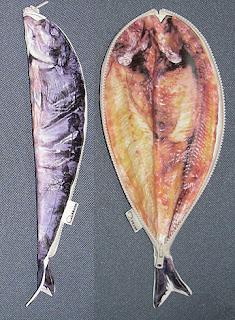 I was given my beautiful dragonfly pencil case by my students. My husband was given this one by one of his students. This one, unfortunately, was not lost. And, I'm pretty sure that it isn't particularly symbolic of anything other than a culture that enjoys itself some fish.

Just before I left Japan, my friends and students gave me a plethora of goodbye gifts. Two students of mine, sisters, gave me a dragonfly pencil case. It was dark blue with gold dragon flies artfully patterned on it. I say "was" because I somehow managed to lose it while walking around Monterey, CA earlier this year. Though I didn't need a pencil case necessarily, I loved it because it was from two students that I truly liked as people and because it represented something about Japanese culture.

There are many differences between old and young cultures. You don't realize this unless you come from one that is closer to one than the other. One of the things I came to understand about Japan is the refinement level you tend to see comes from a culture which has had a good many years to sort out what it values and assigned meaning to various things. In the U.S., we haven't had much time to think about what we want, and a lot of the time the country has been in existence has been devoted to matters of prosperity. Most of what we have is fairly arbitrary and meaningless in terms of symbolism. It's about logos and momentarily popular aesthetics. Logos indicate economic status as you can show what level of goods you are capable of acquiring. In Japan, it's about some deeper meaning in many cases.

My little pencil case was covered in dragonflies because they are a symbol of victory. Such cases are given to students taking tests to encourage the sense that they will be successful in passing their tests and getting into the schools they want to enter. This sort of symbolism is rife in Japan, and it's wonderfully subtle. I miss these sorts of hidden meanings and how they pepper life in Japan.
Posted by Orchid64 at 8:00 AM