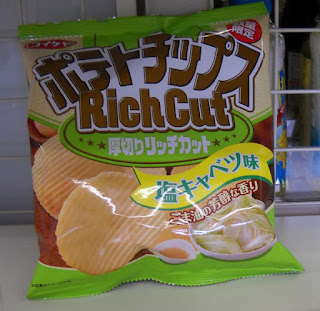 When I was a kid, my mother liked to make a disgusting, sloppy stew of corned beef and cabbage. It smelled horrible and was this wet concoction of awfulness that made me believe that, while many vegetables seemed to be the spawn of the devil, cabbage was old Beelzebub himself. I couldn't imagine ever coming to like the awfulness that was cabbage, and then I went to Japan.

Japanese cuisine taught me to love cabbage because they served it fresh, often thinly shredded and served with fatty dressing alongside crispy, expertly cooked fried pork cutlets (tonkatsu). When you went to most tonkatsu joints, they'd also give you heaping added servings of it, free for the asking. This was in a country which was incredibly stingy about free refills on most things. Eating this extremely fresh pale green stuff created the illusion that the experience of chowing down on breaded fried cutlet and salty miso soup was almost a healthy endeavor.

There is cabbage for the buying in the U.S. In fact, I can buy at least 4 kinds of it at most supermarkets around here. That being said, it's not being served to me with the vast majority of most meals, and, most disappointingly, not with Japanese food when I expect it to be so. The cabbage in Japan was just there, and it was always crispy, fresh and tasty. I miss the presence of cabbage as a casual side dish as well as the texture and quality of the kind that I encountered in Tokyo.
Posted by Orchid64 at 8:00 AM

Email ThisBlogThis!Share to TwitterShare to FacebookShare to Pinterest
Labels: cabbage, food, will miss