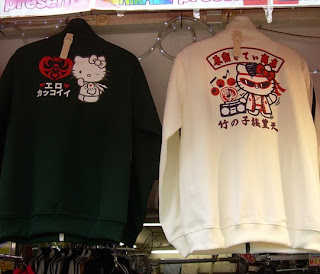 These are almost certainly unauthorized bits of Hello Kitty merchandise. This character's copyright is probably one of the most infringed worldwide. Though these were in Harajuku, I doubt anyone from Sanrio was walking around with a lawyer.

I learned a thing or two about copyright back in my days as a KISS (the rock group) fan. In the early 90's, KISS had lost a lot of their popularity and finding information about them in magazines was difficult. The fans, who were hungry for their KISS fix, found a way to make up for the fact that their favorite band no longer graced magazine covers by making their own magazines or "fanzines". A plethora of them popped up and a handful gained fair popularity.

These magazines were absolutely a labor of love as it was very expensive to print and distribute them. No one was making money off of their work. In fact, most people were lucky not to operate at a loss. The best they could hope for as a way of benefiting was to gain access to KISS information via press kits or the ability to communicate with management for news. At the top of the list of potential perks was a backstage pass if your fanzine caught the eye of the band or their handlers.

Despite the fact that fans were promoting the band for free and not making any money in the process, KISS's lawyers sent them a letter and asked them to cease and desist in all use of the band's trademark logo with two "lightning bolt" S's. This seemed like an enormous slap in the face to those who loved the band. Why would they be so petty? Well, it is about copyright laws.

The way it works with copyright is that, if you don't protect it, you lose it. Even though KISS had no philosophical problem with their fans using their logo, if they didn't stop them from using it, they would lose the ability to stop others from using it. This is why Spinal Tap get together every once in a very blue moon and perform. If they don't, someone else can take their band's name.

One of the reasons that I think copyright infringement abroad is often not protected is that it is more trouble than it is worth tracking down and trying to enforce such rights. It is also the case that, rights are different in various countries so the laws often don't protect them. In the U.S., occasionally an entity will not protect its copyright. Calvin & Hobbes creator Bill Watterson comes to mind considering how many stickers I see of Calvin peeing on things. This situation creates the free-for-all of products which humorously usurp the copyright of various big wigs in the business world. I still miss seeing those products.
Posted by Orchid64 at 8:00 AM

Email ThisBlogThis!Share to TwitterShare to FacebookShare to Pinterest
Labels: copyright, reflection, will miss