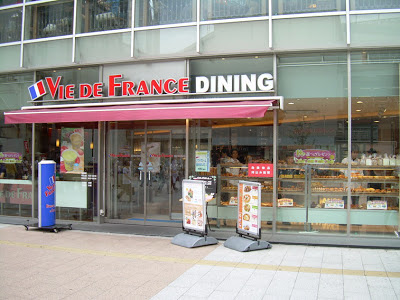 Not every memory that I have of Japan is a weighty one. In fact, I think that life is made up of a series of little memories that will flutter away like leaves on an autumn wind if we don't think to hold onto them and stash them away in a box of keepsakes. This is one of the reasons why we take a million boring pictures during our vacations. They are visual cues about what we saw and did, especially if what we were doing was mundane yet meaningful in shaping our world.

I have many memories of such experiences in Japan, but most of them don't pop into the forefront of my mind when I think about life there. Things like being told we weren't welcome at a restaurant in Nishi-Shinjuku or watching a homeless guy with his penis hanging out of the front of his pants as he trudged down the street of our neighborhood are sitting front and center. They scream "pick me!" when I shuffle through the file drawer of my Japan memories.

Smaller things, like remembering that there used to be a little mom and pop convenience store that we'd browse late at night when we were bored and restless after getting off at 9:00 pm is harder to recall. That store, which vanished about 10 years before we left, was a much bigger part of our experience than either of those one-off weird encounters with exposed genitalia and racism. Not only did it serve as an education in Japanese convenience food early in our time in Japan, but the nice lady who ran it once complimented the design on my husband's and my wedding rings. It was one of the first kind things that someone said to me that I actually understood in a foreign language.

Among those tiny little memories is the experience of going to Vie de France. For those who have not lived near one of these places, either because they are thousands of miles away in their home country or just not located near one of the many branches of this bakery and cafe, this is a chain shop that offers a variety of baked goods, many of which include French-style bread. There are branches of it in the U.S., but the market saturation is not nearly what it is in Japan. Also, by looking at the American web site, it is clear that the menu is very, very different in each country.

Vie de France is owned by Yamazaki Bread Company and most of what they offer is not baked on the premises. Though the food tends to be quite fresh, it's clearly baked off site in most cases (though not all) by a major manufacturer and taken by truck to various locations. These days, the "cafe" angle is definitely the most potent component and you can go there for a light lunch and sit in an overheated room and enjoy bread stuffed with green tea cream, apple danishes that are light on everything including the apple, greasy bland donuts, super-sized melon pan, and various bits of French bread with a handful of Japanese and European-style stuffing. There is always croque monsieur on offer. It's extra greasy, though not particularly cheesy or full of ham.

My earliest experiences with Vie de France were ones of food survival. It may sound odd that I "needed" to go to a bakery to eat, but it was when I neither spoke nor understood any Japanese. If you go to a restaurant and you're deaf, dumb, and illiterate, it's hard to order or communicate. If you go into a bakery, all you have to do is pick up a plastic tray and some tongs, select what you want, and pay at the register. No communication is required, and the food quality is more than a cut above convenience store sandwiches and bento.

I was frequenting Vie de France long before they'd expanded their shop size and become more cafe than bakery. There was a tiny hole-in-the-wall shop that I'd turn to on days in which I wanted lunch on the run. It was always packed to the gills with housewives and school girls noisily conversing. Since my "lunch" was late (4:00-5:00 pm) due to the schedule I kept as a teacher at a conversation school, the tea time crowd, looking to catch a quick nosh and some gossip, was out in full force.

I recall having to fight my way to the register on more than one occasion as the food was crammed into the corner just to the right of the entrance and the register directly across from it. Indecisive customers who had to inspect the quality of every last crumb and ponder their choices among quite limited options as if the fate of the world hung in the balance would block both my access to the food and to the people who I needed to pay. 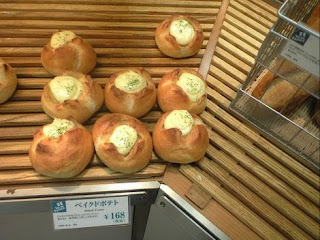 I did not have an image of this particular item, so this one is from another person's site. Oddly, the actual image isn't on her site anymore, but here's a link anyway. These are the potatoes wrapped in bread with a dollop of mayo.

The truth was that I generally chose the same thing on every occasion in which I went there. At that time, I was refusing not only beef (which I continue to eschew to this day), but also pork. There were a plethora of ham and sausage options and nothing with turkey or chicken so my default was what I felt was the least offensive option. I generally went for a bun that encased a small baked potato with a bit of mayo on it. I'd usually pick up one of these and buy whatever passed for "salad" in the refrigerator case and believe I was having as "healthy" a lunch as I could manage on the fly.

Keep in mind that I was 24 years old and didn't have much cooking experience and was operating from a kitchen which was not exactly well-stocked at that time. A refrigerator the size of the one we had belonged in a college dorm room, not an adult kitchen, and it was mainly housing milk and soft drinks with a few odds and ends for dinner as that was all that could be crammed in there. I also had one pan, no or few spices, and no clue as to how to shop in Japanese. I couldn't manage to toss together my own lunch at that point in time because, to me, making my own lunch meant "sandwiches", and I couldn't locate anything resembling American meat or cheese to put together such a thing. It was all I could do to cope with learning a new job and finding my way around the public transport system without having a daily meltdown, so hitting whatever convenient areas with food I could comprehend was the natural choice.

In retrospect, I can see exactly how this sort of eating helped me gain weight in Japan rather than lose it, despite my efforts to avoid anything that appeared overtly fattening and my early dislike of the food in Japan. That dollop of mayo and the buttery potato carried a fattening punch, and eating mostly carbohydrates ensured that I'd be starving by the time I got home. I eventually left Japan weighing less than when I'd arrived, but not until after I'd figured out how deceptive the food could be. It may have looked smaller. It may even have felt lighter and was less sweet, but somehow, it still managed to fatten me up. It took awhile to figure the whole thing out and my early days of hitting Vie de France did not help matters any.