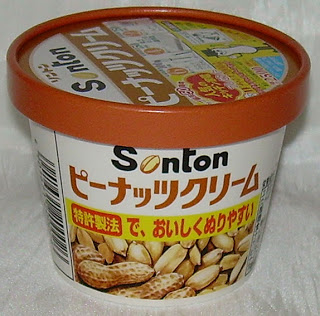 When I first arrived in Japan, it seemed that there was no familiar peanut butter on the shelves. It was only in later years that one or two of the bigger local markets started carrying incredibly over-priced and small jars of Skippy peanut butter. Not knowing what was going on, I bought a carton of the substance pictured above. It was stocked with the jelly and jam and had pictures of peanuts on it. It was also a lot cheaper than peanut butter. Of course, I could not read the Japanese at all.

The carton actually says "peanut cream" and it's not peanut butter. It's much more like a cross between jam and peanut butter. It's glossy, sweet, sticky, and pretty disgusting. To complicate matters, there is another version of this which is "whipped" that is very decadent, but is more like frosting than peanut butter. There may be some Japanese companies that make real peanut butter, but the only type I ever saw was Skippy. The whipped variety is fantastic, but really not "food" so much as a treat. You see it most often spread into French-style bread in bakeries.

I don't miss the peanut cream nor the absence of affordable peanut butter.
Posted by Orchid64 at 8:00 AM