Random Thoughts: The Shape of You 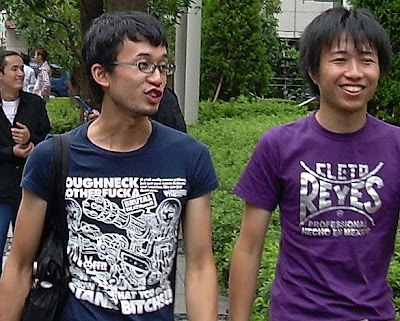 Recently, I've been taking a graduate school class about substance abuse. This is my second and last free class courtesy of my husband's institution of higher learning. They have a policy of allowing the significant others of their students to audit one class per year, and I have availed myself of it to the maximum extent.

The education that I receive from it has been beyond the course content and has extended to affording me the chance to make new social contacts as well as proceed with my "re-acculturation" to the United States. It's only by being in such situations that I see just how uncomfortable I am with the culture I was born into after 23 years abroad. It also allows me to gain understanding into how I became so desynchronized with that which I was once effortlessly in sync.

The teacher of this particular class is someone with copious amounts of experience in counseling people with substance abuse issues and alcoholism in particular. She used to run a residential facility, is active in 12-step programs, and continues to counsel people with such problems. In this area, I'd say she's about as knowledgeable as a person needs to be to position themselves as an authority, if not an "expert".

The class that I took previously was on psychopharmacology and that teacher was a former nurse who knows a lot not only about psychology, but also about the body in general and how it interacts with drugs or manifests illnesses. Her expertise was in both physical and mental illness. Though it's hard for someone who is not a researcher to be an "expert" in such an area, she had a well-rounded knowledge and the wisdom that comes from diverse experience as both a therapist and a medical care professional.

Taking classes from these two women has taught me less about the body, drugs, and psychology than it has about how the type of life we live and the people surround us shape who we become. The woman who taught psychopharmacology does some of her private practice with a lot of Silicon Valley workers as well as a broad range of people with other issues. Her approach to teaching was interactive, supportive, and validating. She deals with people with problems, but most of them are not seeking help because they were mandated to do so by the criminal justice system. They are looking to improve their quality of life.

The substance abuse teacher, on the other hand, is dealing with far harder cases in her life. She's handling people who aren't seeking help because they want it, but because, in many cases, they have to get it or go to jail. Her approach in class is more didactic, directive, and invalidating. She can come across as dismissive and controlling. Her faith in her viewpoints and approaches is much more certain and she does not easily or quietly entertain the idea that her way of offering treatment may not be the very best. In her view, it's about work, and a particular kind of work, to deal with addiction. When asked for alternatives to her preferred way of dealing with those with substance abuse issues, she came up blank. The whole notion that another way should be planned for in case someone didn't find that AA didn't do it for them just wasn't on the radar because she is sure that the 12-step way is the best for everyone, if only they'll commit themselves and do the work.

It occurred to me after my third five-hour class with this woman that she has been shaped by her experiences. She has to deal with people in a fashion which is more judgmental, pushy, and direct because she deals with liars, criminals, and intractable addicts. The teacher who is a former nurse is softer, more supportive, and open because she deals with people who want to end their psychological pain, not pry a monkey off their back because they've got too many DUIs on their record.

I think that both of the women who I've received instruction from are smart, compassionate, and kind, but they have been unconsciously shaped by their respective experiences. To some extent, of course, we are drawn to what suits our characters, but our characters are also shaped by our experiences. We are, to some extent, poured into a particular mental shape, a mentality, by the world around us. This is where I come to talking about Japan again.

I realized very clearly how living in Japan has changed me. It made me more patient, more open-minded, polite, rule-oriented, and, oddly, racist while being all too aware of that growing racism. It was the old "familiarity breeds contempt" thing, and, no, I didn't like it and am ever vigilant about such feelings creeping up and trying to process them so that they don't grow into something ugly. Anyone who claims they are not racist on some level is lying to themselves and you by default. Racism is a weed that you have to keep pruning back, not a plant that you can exterminate from your inner garden, but that is actually a digression from my main point.

What I have realized since coming home is that America and the people around me are pressuring a "reshaping" of me. I feel myself growing harder, more aggressive, more defensive, and prone to fight back against the rampant uninformed and aggressively opinionated views that are peppering my experiences. I don't want to be that person, but I'm constantly buffeted by the things that happen around and to me. I want to be the person I was when I left Japan, but that person may be too "soft" for life in America. If you deal with a society which respects social order and rules, you can let your guard down and expect that it's less likely that people will take advantage of you for it. Here, I have learned that you have to constantly be on the defense or others will simply roll over and crush you. They don't see this as a "bad" thing because they expect you will do the same to them.

This occurred to me because I think that, had my teacher not gone into substance abuse counseling, she may have approached life very differently. I think that her relative absolutism, lack of validation of her students' ideas and opinions, and defensive reactions to counterpoints when they create cognitive dissonance for her are the product of the atmosphere she spends her working life in. Seeing how my two teachers are shaped differently reinforced my feeling that living in America is changing me and how it makes me unhappy, uncomfortable, and sad. Japan is a place where you can evolve into a kinder, gentler person, not because it is an inherently kind or gentle place, but because the social order allows for a certain protection that the chaos of public life in America does not easily permit.
Posted by Orchid64 at 8:00 AM