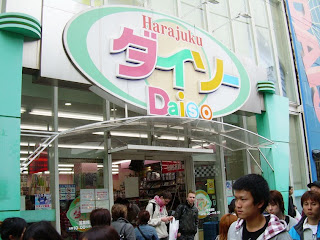 I've mentioned on my other blog that Daiso Japan branches are located in California. There was one near where I used to live, but I moved, and that shop closed down around the same time. For those who don't know, Daiso is a 100-yen shop in Japan. In the U.S., it's a $1.50 shop.

The American equivalent of a 100-yen shop is a dollar store. However, there really aren't that many actual dollar stores in the area I live in, despite it being pretty full of shops. I have come across several of such stores, both in San Francisco and in the Bay Area, but they've almost uniformly been dismal affairs. Not only is the selection of goods poor and unattractive, but most of the stores are shabby, dirty, dingy, and located in areas that you may not be entirely comfortable walking around in at night.

In Tokyo, the 100-yen shops were almost uniformly clean, tidy, well-stocked, and in good areas of the city. Not only that, but some of them, the Lawson 100 chain, were actually mini grocery stores that sold fresh and frozen food that you were happy to eat. It wasn't scary, creepy or nearly outdated like the food you see in the dingy areas of dollar stores here.

I truly and totally miss the 100-yen shops in Japan. They were convenient, cheap, clean, and fun to shop in.
Posted by Orchid64 at 8:00 AM