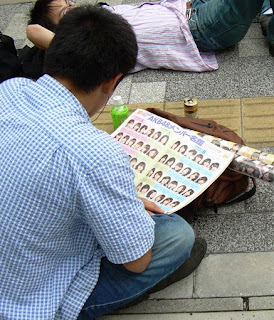 I wonder when the first annoying teen musician first appeared on the scene. Was there some pretty boy cave man who wow'ed the post-pubescent girls with prominent brow ridges? Perhaps it all began with the advent of the first mass media. I think that the first one that I can think of was Enrico Caruso. Though I am old, I'd like to make it clear that I was not actually present during his years of incredible popularity. That's no only because he was in Europe during most of his performing years, but also because he died 43 years before I was born. In this day and age, Caruso would have never cut it as an idol in either Japan or America because he was not "cute". While a perfectly fine looking fellow, he didn't have doe eyes and full pouty lips.

Here in the U.S., my exposure to idols is limited to strolling past the school supply sections of some stores and seeing Justin Bieber's mug plastered on notebooks and binders. In Japan, I saw a lot more of that sort of thing, and I don't mean more junky fodder for "Beliebers", but rather just a lot of wide-eyed nymphettes and girly-boys. Part of the reason for that was that I lived in a city so I saw more product and advertising, but another is that "idols" in Japan aren't just for the younger set. They're also there for adults, particularly men, so there's a wider audience for such fodder.

I really don't miss seeing the endless, almost identical parade of similar-looking boys and girls that comprised the "idol" set in Japan.
Posted by Orchid64 at 8:00 AM