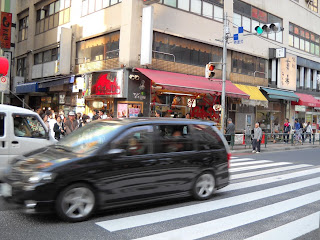 Early on in our time back in the U.S., my husband and I had an experience which came to represent one of the many psychological differences between Americans and Japanese. There was a judgement call at a crosswalk in which a pedestrian who had not yet entered the crosswalk was walking fast down the street toward it as our car approached the intersection. There was no crossing light but there was a stop sign. Since the pedestrian was not in the intersection and was somewhat distant from it, my husband had to make a guess as to whether or not to pull up to the intersection to turn right and proceed. He went up to the intersection, and was preparing to turn when another vehicle came up rapidly and he had to halt in the crosswalk due to the unexpected change in conditions.

The pedestrian deemed this to be a violation of his right of way and the law that cars yield to pedestrians because he could not merely saunter straight through the intersection. He had to walk about 4 feet back around the car or he had to wait for our car to clear the crosswalk. Never mind the fact that he wasn't in the intersection when these events rapidly played out (which is a clear indication that a car should yield and stop before the crosswalk). He felt so entitled to walk across the moment his pace took him to the crosswalk that he banged his fist on the back of our car in angry retaliation at what he viewed as a violation. What it was was an issue of timing and judgement, and an unclear understanding of when he was actually going to enter the intersection and the impossibility of predicting that another car would come and our car could not clear the crosswalk as anticipated. The pedestrian is, at least in California, king.

In Japan, no pedestrian expects that cars will yield to them unless the light has been on "walk" for quite some time, and even then you have to be apprehensive. In America, I've seen pedestrians scream or behave angrily more than once over perceived failures to yield. In Japan, drivers behaved far more aggressively toward pedestrians than they do here because there are rarely consequences either legally or socially. I don't miss the way cars would regularly run lights and cut me off while the police stood by in their koban (police boxes) and watched it happen.
Posted by Orchid64 at 8:00 AM