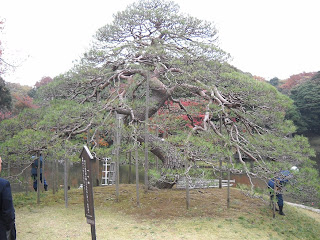 It's a winter wonderland, isn't it? This is part of what four distinct seasons looks like in Tokyo.

Since returning to the U.S., I have not experienced one person for whom their weather is a point of pride. Of course, living in the Bay Area, "their weather" is "sunny and hot" or "sunny and not so hot". The seasons here are pretty much "the grass is brown" (summer) or "the grass is green" (winter). Frankly, I hate the weather here because there's too much sun. I don't hate it nearly as much as the summers in Japan, but I do miss the presence of rain as well as the winter and all too brief autumn in Tokyo.

So, I guess it's no wonder that a place that appears to have two seasons wouldn't go on about how it has four of them, but even those who live in more seasonally differentiated area (like my sister, who lives in Pennsylvania) never speak of their weather as if it were unique and worthy of remarkable interest.

I absolutely do not miss people telling me again and again and again that "Japan has four seasons" as if it were the only area on the entire globe that possessed this special status.
Posted by Orchid64 at 8:00 AM