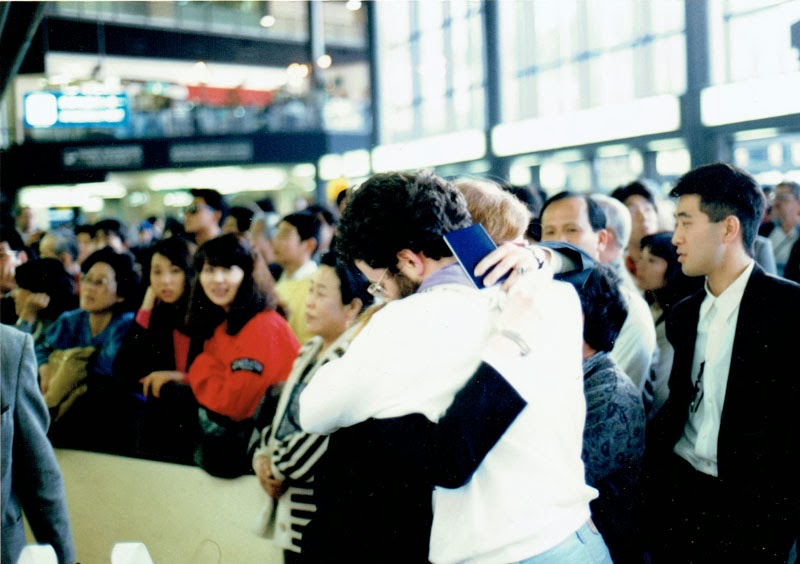 All those people behind us? I didn't see any of them.

One of the questions that my students loved to ask was what my first impression was of Japan. Any time that this question was asked, I wondered what answer they would have expected. It made me think about what I initially expected when I arrived in Japan. The fact of the matter was that the circumstances under which I entered were so unique, as my readers know, that I wasn't really attending to the idea that I was in Japan. That was incidental and a mere backdrop to the main event.

My guess was that my students were expecting things like my noticing that the people were smaller (both shorter and thinner) or something about the architecture or the public transportation - perhaps praise for the food. The truth is that I don't think they thought much about the circumstances under which a foreign person forms an initial impression of Japan. I think my students were imagining a wide-eyed foreigner looking around Shibuya or Roppongi, likely dazzled by the stores, the lights, the noise, and the vast oceans of smartly dressed people.

The truth is that my first impressions were formed largely by a few relatively mundane places - the airport, the Skyliner which took me from the airport to Kita-senju, and my boyfriend's apartment. I took an American airline from Pittsburgh to Tokyo (with a stop in Detroit) so I didn't have the bi-lingual announcements in English and Japanese nor the polite Japanese air hostesses that one experiences on JAL (Japan Airlines).

My boyfriend at the time, and future husband, had flown in on JAL and wrote me a 16-page letter describing all parts of the flight experience and it included having to wait for every announcement to be translated before he knew what was going on. He also mentioned that the food was rather weird in his estimation and that he went for the "safe-looking" parts like the rice and anything that resembled meat. For me, it was packages of cheese and turkey cold cuts as well as boring American food.

My plane was nearly empty save a neighbor who was reading some sort of engineering information on water reclamation or some such boring thing. He was from Hong Kon and I didn't even lay eyes on a Japanese person until I stumbled off the plane, bleary-eyed and feeling disgusting after a 14-hour flight and a sweaty run to reach my connecting flight in Detroit on time. The first Japanese person that I spoke with was the officious, quiet, and business-like customs man who inspected my passport as I dragged my suitcases behind me on a trolley.

The first thing I noticed though was not Japanese people, but rather my boyfriend - who as those who know the story know I saw in the flesh for the first time in that airport. He was surrounded by Japanese people, of course, and they gawked at us as we had a five-minute hug, but I only know they were there because of the pictures that were taken. If those pictures didn't tell me that we were being looked at and crowds of Japanese folks were around us, I wouldn't have known.

So, there was actually far more that I didn't notice than I did. The truth was that my first impression of Japan, the very first thing that I actually noticed, was the smell in the airport. It was remarkable because it wasn't the sort of thing one usually encountered in the U.S. outside of a specific restaurant. The airport had the aroma of cooking fish. My guess is that it was wafting from some restaurant located not too far from where we were or that some errant ventilation shaft brought in a whiff from some place.

When I relayed this memory to students, they were surprised. I think they were also disappointed. It was hard to explain to them that my first impressions were formed in a type of blindness to my surroundings that most people were unlikely to encounter. In fact, it was nearly impossible to make them understand.

Beyond that very first impression, there was the noises. On the Skyliner, I noticed the rattle of the train on the tracks. I'm pretty sure that it was not unique and that I only noticed because it was the first time I'd ridden on a train. Again, I was far more aware of the way it felt to have my boyfriend's arm around me for the first time and how he accidentally grazed one of my breasts with his hand (truly, it was an accident - he's not that sort of guy).

The final lasting early impression was again, related to a smell. The moment you walk into any Japanese apartment with tatami mats, you will smell the scent of the straw. It's possible that the age of the straw mats has something to do with it, or the number of windows that are open or how long they've been open, but that smell is very distinct. If you're around it every day, you stop smelling that tatami scent, but if you go away for awhile and come back, it's there again.

That scent, which is earthy, but also slightly musty, starts to permeate your possessions if you store them in the same room and don't routinely move them around or wash them (as you do with clothing). We kept our suitcases in the highest section of our bedroom closet, but when we visited home, my husband's father said that he could smell a familiar smell that he'd first experienced when my brother-in-law (who also lives in Japan) came home for a visit. Despite being stored a good 6 feet above the floor, the smell of tatami made its way into our suitcases as they so rarely left the room.

So, my first impressions are not glamorous, exciting, or particularly flattering, but they were very real. They are about smells and clattering noises. I think my friends back home expected me to talk about my impressions of geisha, zen gardens in temples, and Mt. Fuji. I think that's because most people experience a foreign culture at a distance through pictures or, at best, video. The full sensory experience is one they don't tend to imagine and Japanese people, who are inured to the scents and sounds that are so much a part of their daily life, don't expect those elements will form the first impressions a foreigner may have.
Posted by Orchid64 at 8:00 AM