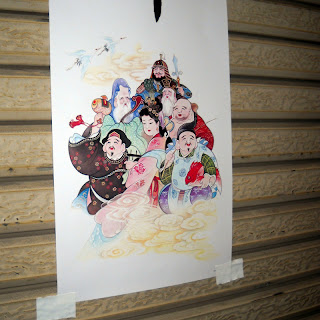 This year will be the year of the horse. The fact that I pay attention to that is one of the lasting effects - one among many - of my time in Japan. It may seem a mere bit of trivia or an aspect of culture meant to add color and interesting fiction to the changing of the year. To me, it is more than that. It is a reflection of the  the way in which the shape of time passing is framed differently in various cultures. We see it mainly as numbers. They see it as rather different types of numbers or as something affiliated with an animal or different characteristics for those born in that year.

The important thing to me is to keep the understanding of varying perspective in mind. I see "2014", someone else sees it as Heisei 26, and others may see it as the year of the horse. Perspective is affected by numerous things such as this. For example, if you see the year as Heisei 26, then you're framing time through the number of years that someone has been emperor. Culture and the characters shaped within a particular one are built by such things. When you understand that, you start to appreciate and digest the complexity that makes up all of we humans.

I hope 2014 brings all of my readers a world full of the richness, personal growth and enlightenment that such complexity can bring.
Posted by Orchid64 at 12:00 AM