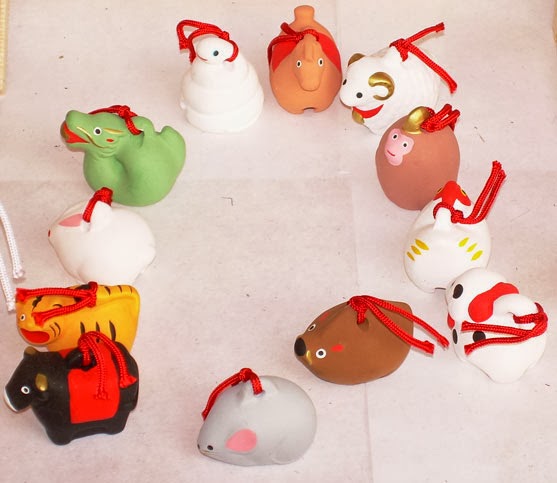 Shortly before the new year, my husband and I met a Japanese acquaintance at a Starbucks. We talked about a variety of things, including what it was like to go to shrines during the biggest holiday of the year in Japan. She thought it might be fun to go to a shrine in America on New Year's day. However, despite the fact that there is a large community of Japanese people in the area, there were no shrines offering services of any sort on the day, and only one make-shift church doing so on January 3rd. We were all disappointed by this fact, though not necessarily surprised.

While it is impossible to go to shrines where I'm living now, it is actually within the realm of possibility to buy the trinkets that are sold each year in accord with the Chinese horoscope (pictured above). They are sold, somewhat expensively, in souvenir shops in Japan town in San Jose as well as in a few places in other cities that are not too far from where we're living. That being said, stripped of the time and the place in which they held significance and stronger symbolism, they are reduced to feeling like mere knicknacks.

I can say that I don't necessarily miss the physical objects, but I very much miss the memories they would carry for me when I bought one at a shrine in Tokyo.
Posted by Orchid64 at 8:00 AM