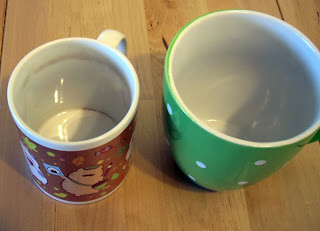 I knew that there would be some things that I'd realize about life in Japan only after coming back to the U.S., but this is one that I never expected and couldn't have guessed. Awhile back, I posted about the habit in Japan of bleaching the crap out of everything, especially drinking cups. At that time, I thought they did this because of  an obsession with things looking clean that those of us in the West lacked. It turns out that there may be a bit more to it than that.

Just before Christmas, my brother-in-law came back for a visit and, to my utter delight, brought me some debu neko cups. I love the old debu neko (chubby cat) design and collected quite a few of these stuffed toys before coming to the U.S. The mugs he brought are just another way of bringing a little of their charm into my day and I switched over from a French-made cup (on the right in the picture above) to these charming little cups.

I have been drinking tea in the green cup on the right for quite some time and washing it by hand with regular dishwashing liquid. Shortly after I started using the debu neko cup from Japan, I found that it didn't wash clean the same way that my other coffee cups do despite having the exact same beverage and the same washing regime. I do not know why this is the case, but the Japanese cups stain from tea in a way that the other cups I have do not (and in a way I experienced in Japan for years). I'm guessing there is something about regulations or composition of the material that is different, but I now know why they bleach everything so often. If they don't, their cups will look like the cup pictured above on the left.

I don't miss this tendency for the cups to stain. In fact, now that I have these adorable cups and intend to keep using them, I can't possibly miss it. ;-)
Posted by Orchid64 at 8:00 AM