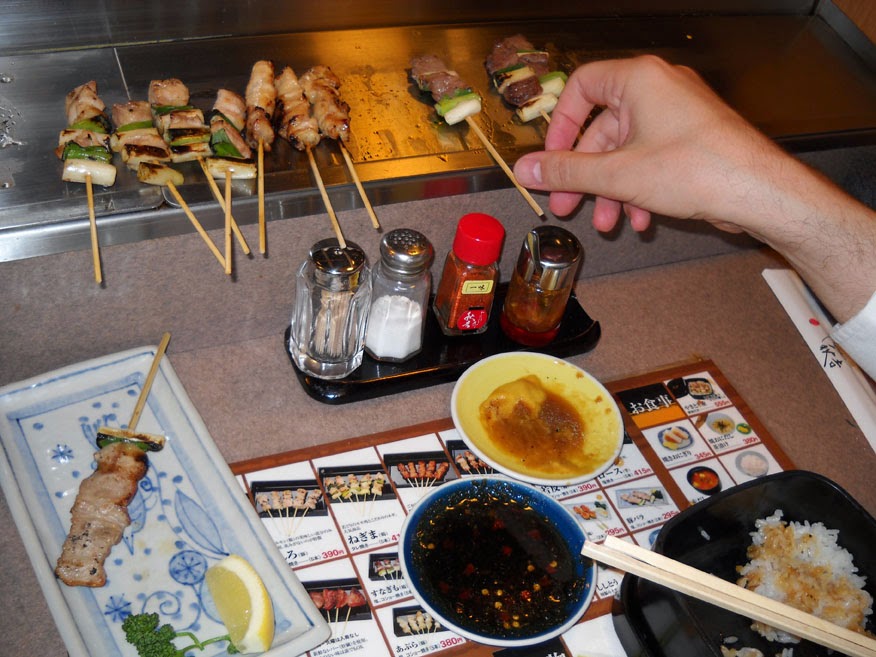 Sticks served on a stainless steel rim around the food preparation area at Akiyoshi.

One of the things that I mentioned to my husband about living in California was that it was not a happy place for me because I had no good memories associated with being here. In fact, I only had bad memories connected to it as the 10 months that I lived here from the summer of 1988 to the late spring of 1989 were not happy ones. He grew up where we are living now, so he at least has some sense of nostalgia and sentiment connected to the location. That being said, during our 23-year absence, the area he grew up in changed a great deal so even he doesn't have a lot of fond connections for particular places.

There is a lot to be said for places at which you've built memories by frequenting them. Akiyoshi was one of the first places in Tokyo that became familiar to me, both in terms of the food and the atmosphere. There were three locations in range of our apartment or our workplaces - Nakano, Ogikubo, and Ikebukuro. We used to hit the one in Nakano 2-3 times a month during our first year or two and the one in Ogikubo became our once a month visit during our last year. In fact, we had our last meal in Japan at the Ogikubo branch of Akyoshi.

I have so many memories of Akiyoshi and they are all quite good. It's a place which not only had good food, but a convivial atmosphere and a menu any foreigner could find tasty dishes on. I truly miss Akiyoshi and probably will for the rest of my life.
Posted by Orchid64 at 8:00 AM