Will Miss #40 - people doing their own thing (reflection) 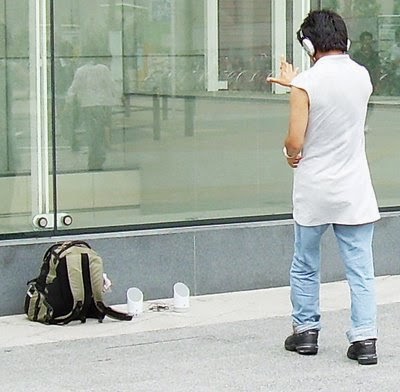 If this guy were in America instead of Akihabara, he wouldn't bother wearing headphones, he'd just blast that music aloud.

At some point within this past week, my husband and I were crossing a street and a guy on a skateboard crossing in the opposite direction was loudly and theatrically singing "Somewhere Over the Rainbow." After he had passed, my husband asked me if I thought he was mentally ill (as a lot of such unfortunate souls are conversing with unseen parties) or if he was just unaware of how inappropriate his behavior was. My answer was that it was a case of neither and that, in my experience, he was just being a not atypical American.

I'm sometimes floored by how people behave in public spaces as if they were private. I'm not talking about people who hug or kiss in public in moments of unrestrained passion (also, hugging in public is a greeting in the U.S. so it's not so strange). I'm talking about people who seem mentally well who will sing aloud or talk to themselves aloud - without any sort of phone - I've seen people discuss the contents of their shopping cart with themselves. America has either really changed since I left it in 1989 or the Bay Area is vastly different from where I grew up, but people really seem quite unrestrained now in these areas.

In Japan, the people who did their own thing rarely sang or conversed to themselves (though it did happen). They, more often than not, would dance, do golf  or baseball swings, or some sort of movement which seemed unusual in public. Americans tend to be verbal about it. Japanese tended to be physical. Frankly, the latter was less disturbing because you could just not look. It's hard to not "hear" someone who is being loud.

I can't say that I miss people "doing their own thing" in public since it happens so often here, but I can say that I found the way in which it happened in Japan less disruptive and charming. That's a biased I've formed, no doubt, but I'm being honest.
Posted by Orchid64 at 8:00 AM

Email ThisBlogThis!Share to TwitterShare to FacebookShare to Pinterest
Labels: doing your own thing, reflection, will miss