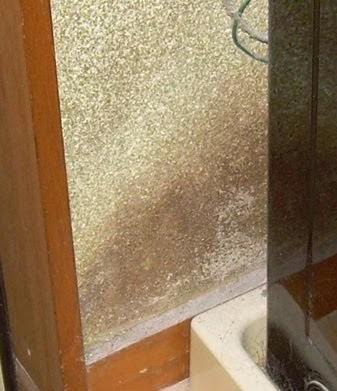 The wall behind my washing machine - it turned nearly black with mold that grew in warmer months and died in colder ones then came back around again the next year.

During my first year in Japan, one of my coworkers told me about how mold seemed to spring up everywhere in his apartment. He told me that a pair of shoes that he left in his genkan (entryway) had even seen a crop of the stuff take up residence. When I expressed that that sounded incredibly gross, he said it was no big deal and that "mold is a gentle creature" and he just wiped the stuff out of his shoes.

My previous post reminded me of something I would have rather forgotten. That is, the ease with which mold tended to take hold in Tokyo. I can speak for every single place in Japan, but I can say that mold seemed inescapable in the humid sub-tropical weather there. It did not matter how well we ventilated our home. In fact, it was so poorly insulated that there was no way to make it anything but drafty both against the summer heat leaking in and the frigid cold in winter.

I grew up with relatively humid summers in Pennsylvania, but we never faced the sort of mold that I encountered in Tokyo and I absolutely do not miss it.