Will Miss #536 - having a laundry hook-up in the apartment 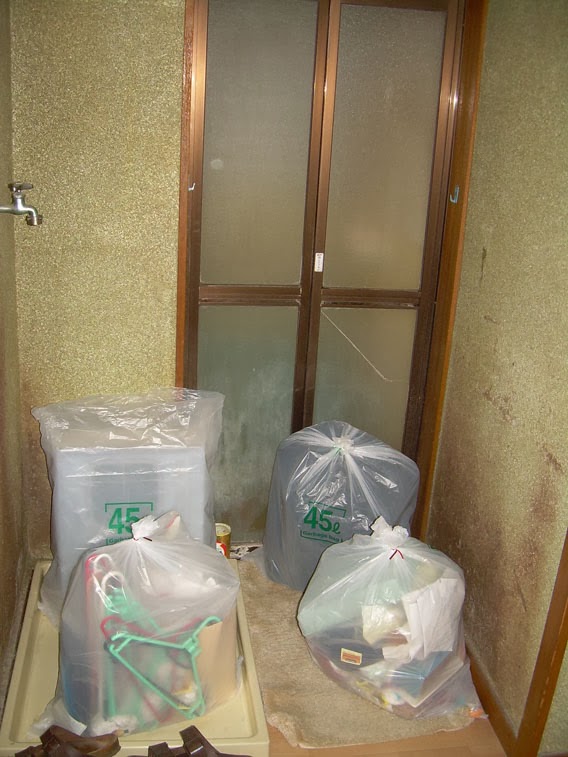 The beige tray on the left (under the water spigot) was the home of my machine for more than two decades. You can see that there are disadvantages - mold developed on the walls behind and in front of it from moisture (both from the machine and the bathing area behind that door). Those trash bags were the things we were tossing out when we were vacating the apartment. It's not garbage so much as possessions that weren't worth carrying back to the U.S.

Prior to spending most of my adulthood in Japan, I had not lived in a truly independent fashion. I spent 23 years in my parent's house and then a year in California in my husband's best friend's house. The ease of living in a house was something that I took for granted. I had never rented my own place in the U.S. so I had no idea how that all tended to work when I returned to the U.S. at the age of 48. One of the surprises in store for me was that most apartments, at least in the Bay Area, don't have their own laundry facilities or a space in which one can set up a machine.* You have to rely on public or communal apartment (pay laundry) machines. Though the apartments here are bigger inside, people seem to prefer filling that space up with their crap instead of having the convenience of on-site laundry capability.

In Japan, there was space in my apartment for a washing machine. It had a plastic shell and a built-in drain. It was in the space next to the area with the tub and shower so I could recycle water from the tub if I wanted to by putting it in the washing machine. After spending some time back home dealing with the hassles of public laundry facilities which often consume my quarters without offering full service (either because the machines malfunction or the dryers are anemic), I truly miss having the ability to just toss my clothes into a machine any time I want.

*Note: I know I can buy a portable washing machine and manually hook it up to a sink. However, this is not the same as having a dedicated space with a drain and water faucet. Lugging a machine back and forth and connecting it to the sink is not something I want to be doing - not to mention I'd still have to use the laundry room's dryer since there's no space for hanging clothes up to dry in most of the apartments here.
Posted by Orchid64 at 8:00 AM