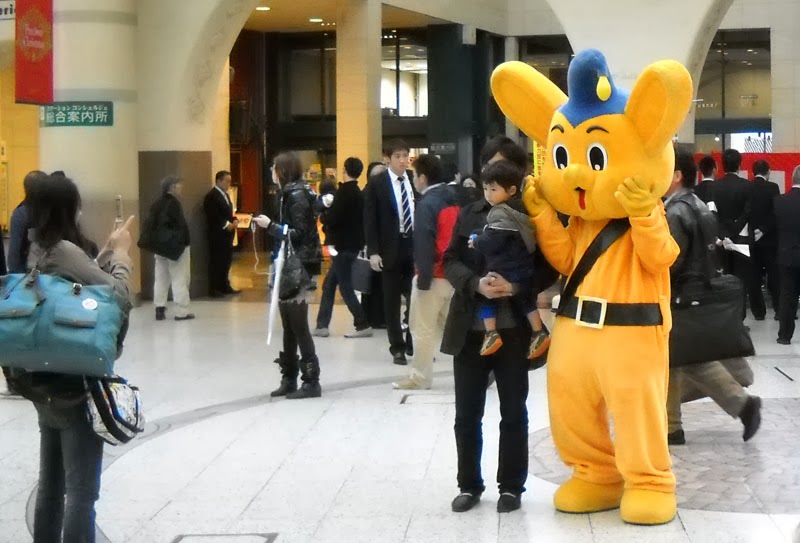 I don't think having your picture taken with the police mascot would have been an arrestable offense, but I wouldn't take any chances.

Early on in our time in Japan, my husband and I knew that the Japanese police could hold you and disallow contact with the outside world entirely if they chose to do so. "You" means "foreigners", of course. This could happen for no reason at all or for something trivial like if one of us happened to step outside for a moment without our gaijin cards and a policeman was walking by. This was an oddly not uncommon experience in my neighborhood as they seemed to go around to the houses not infrequently). In theory, a police officer could refuse to allow us to step inside our apartment to get our I.D. and show it to him. He could haul us off to the local police station and hold us until someone brought the gaijin card. Oh, and they don't have to let you call someone and ask them to bring it.

So, my husband and I had an agreement that, if one of us seemed to vanish, we'd start with going to the police station to see if one of us had nabbed and disallowed a call. Does this sound far-fetched? Yes, it was unlikely, but it did happen to people on occasion - yes, even white people. It was one of the first things I was told about and warned against when I arrived in Japan in 1988.

I don't miss fearing that I'd be arrested and held without the ability to contact my husband and let him know what had happened to me - small as that chance may have been.
Posted by Orchid64 at 8:00 AM