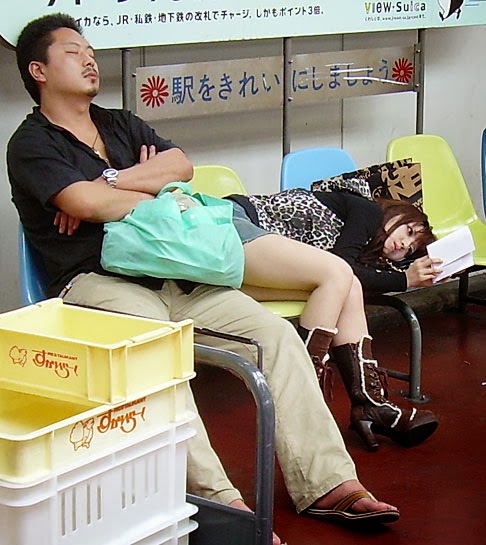 Shortly after we moved to the Bay Area in the late spring/early summer of 2012, my husband remarked that he thought it was nice that some people felt free to just sack out on a picnic bench somewhere. It wasn't something that we saw often, but, on occasion, people would sleep in public after a hard day or during lunch. This is the uncommon sort of sleeping in public that I see here in the U.S.

The more common type of "sleep anywhere" in America is homeless people. Sometimes they are stretched out in parks (which also happened in Japan) and sometimes just slumbering in front of the local library or even on a street near a shopping area. More often than not, the vibe from public snoozers is not a happy one.

In Japan, most of the people sleeping in strange places, and the range of areas was far greater than it is here, are clearly employed and homed. The vibe you get is a curious one, perhaps even a little amusing. I miss seeing people sleeping anywhere they're too tired to go on and feeling like it's actually kind of cute rather than sad.
Posted by Orchid64 at 8:00 AM