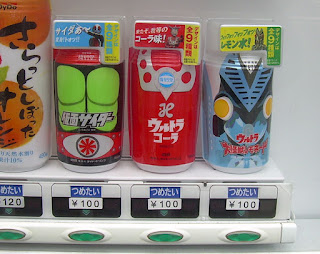 Ultraman soft drinks being sold in a vending machine in Tokyo.

When I was a kid, there were two Japanese things which I saw on television on a regular basis. One was the Saturday afternoon Godzilla movies which set the stage for hundreds of jokes about Japanese people's mouths moving out of sync with their words. The other was "Ultraman", who had no mouth so we didn't know if his words matched his lip movements. Ultraman used to air in the after school time slot (around 4:00 p.m.) when I was growing up and, though I am absolutely not a fan girl, I have a very nostalgic sense connected to this particular character. Seeing him reminds me of a time when Japan wasn't a place to me so much as a concept. It wasn't cool or creepy, but just the origin of a very different kind of entertainment that had verisimilitude for all kids worldwide.

Ultraman was part of my earliest exposure to Japanese culture and marked a time when I regarded it with purity and innocence rather than analysis or judgment. I will miss seeing Ultraman peppered throughout pop cultural life on a regular basis and the sense of warm nostalgia that the character brought on.
Posted by Orchid64 at 8:00 AM