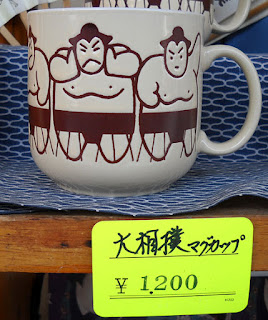 Hawaiian sumo wrestler and former champion (ozeki), Konishiki, once said in an interview that he found the bananas in Japan very disappointing. He said that they were relatively flavorless and paled in comparison to those he could get back home. In my youth, that is to say, up until I was 24, I never really ate bananas much nor paid attention to the flavor of them. I didn't start eating them regularly until I went to Japan and was old enough to attend to my health and focus on eating fresh fruit. Among the various types of fruit available in Japan, bananas were always the most economical, so I ate a ton of them as the years went by. It has only been since returning home that I realized the truth in what Konishiki had said. The bananas here are better tasting. It was quite a shock to my husband and I when we ate our first one. On the whole, bananas are more flavorful and sweeter in America.

I won't miss the relatively bland, tasteless bananas that I used to get in Japan.
Posted by Orchid64 at 8:00 AM