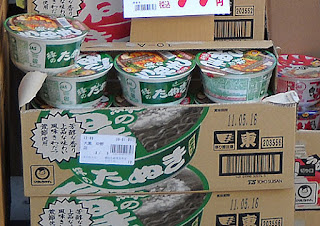 I used to scoff at the idea that Japanese food in general was any purer or fresher than American food, especially considering the distance it took for most of it to reach us in Tokyo. It doesn't help that the origin of a lot of the food was China, Mexico, or other foreign countries which means it had already had a long and tiring journey by the time it reached my table. However, since returning to the U.S., I've learned a few things. One is that the food here frequently has far longer expiration dates than food in Japan did. Lunch meat in Japan might keep for a week. Here, it is a bit scary learning how long it is supposed to keep. Why would this be? Well, it's chemicals. Not only do the Japanese not use artificial dyes in their food with the frequency that American businesses do, but they also don't saturation bomb their perishable packaged food with preservatives so they can be tossed in the refrigerator and remain edible for three weeks.

While it is certainly convenient for food to keep a lot longer in the U.S. than it did in Japan, it has a funky taste which I'm sure I was once accustomed to and now find hard to bear. I miss food in Japan which was prepared with far fewer chemicals than that in America.
Posted by Orchid64 at 8:00 AM