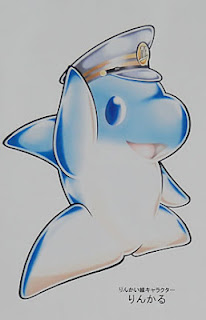 Rinkaru, the mascot of the Rinkai line.

There are copious blog posts by foreigners in Japan writing about the various mascots invented to lend color and personality to various aspects of Japanese society. These characters are called "yuyu-kyara" in Japan. The police, firehouses, shopping areas, and even various train stations have their own characters. In many cases, possibly most, these characters are contrived to find a way to merchandise or lure tourists. It has reached the point though where there are so many of them that you can't really remember which ones to identify with a particular area. Some areas even have two mascots. For instance, Sugamo has both a cartoon duck and an chibified version of Jizo, a Buddhist priest.

While I can understand the desire to give a service or area an identity with a mascot, the extent to which these characters populate the culture in Japan feels like it's too much. They blend into a sea of cutesy characters which forms an army so large it could easily defeat the cumulative bank of Disney characters in cartoon-land combat. I won't miss seeing a cute mascot for nearly everything everywhere I go.
Posted by Orchid64 at 8:00 AM