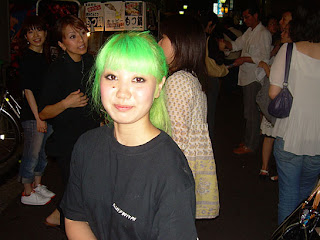 I'm not saying it'll turn your hair green, but just using this picture because this lovely woman has awesome hair.

Back when I first started working in Japan, one of my British coworkers at Nova was having a conversation about going about ones daily life in Japan. She mentioned that she had to spend a lot of money on shampoo because she had to buy imports or have things sent over from England. When asked why, she said that Japanese shampoo was like dish soap. She said it was too strong and stripped her hair of essential oils. After many years in Japan, I forgot about this conversation and tended to just slather my head with conditioner ever time I shampooed, but it came back to mind once I returned to the U.S. and took my first shower and used American shampoo. I'm not sure what the issue is with Japanese shampoo and my hair (which is "normal", neither fine nor coarse), but I'm guessing it may be formulated for coarser hair than the average Western person. It seems my former coworker was right about the shampoo being harsher on at least some women's hair.

I won't miss the stronger/different shampoo in Japan.
Posted by Orchid64 at 8:00 AM