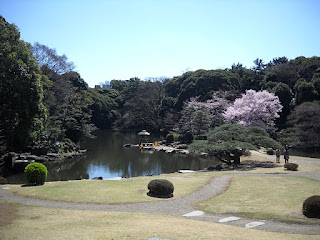 Obviously, having never been to an onsen, I don't have a picture of one. However, this is a picture of water located in Japan. Theoretically, one could bath in it. Sorry, it's the best I can do.

Japanese people almost universally love onsen (hot springs) and every time I asked someone what they did over a vacation or weekend and they said they went to an onsen, I had to have the same exchange with them. "Have you ever gone to an onsen?" "No, I haven't." "You should go to an onsen!" I would explain that I get stared at more than enough with my clothes on and don't need to go to an onsen and give them a chance to gawk at the full monty of me. The response to this was inevitably to counter that there are "private" areas in which I could go and stew until I was the temperature of a boiled egg in private. To this, I would say that I don't like very hot baths and, in fact, sometimes have blood pressure issues from being immersed in temperatures that are high. To this, I was told to stay in for a short time only. Sigh. I would then say that I didn't see the point of going somewhere and paying money to do something I didn't enjoy. And then they would give up until the next time when everything I said about not wanting to go to an onsen for the aforementioned reasons seemed to have been completely forgotten.

I understand that Japanese people are happy to sit naked in very hot water with strangers of the same sex and boil their bodies, but it's not my idea of a good time. Their enthusiasm for this endeavor seemed to override their usually highly developed sense of empathy and I won't miss being hounded to go to onsen again and again and again.
Posted by Orchid64 at 8:00 AM