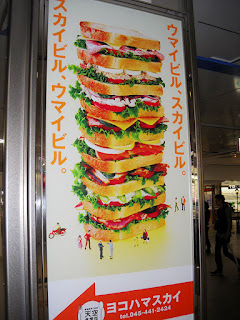 No culture can do everything right. Conversely, no culture can do everything wrong, though many would  have you believe that America does. At any rate, I can't say that America does sandwiches "right" as many of them are gooey, overloaded with meat, and enormous. That being said, I can say that, in my opinion, Japan definitely does them "wrong". Most of the sandwiches in Japan are more akin to the whitest of white bread with a light spread of something rather than a balance of filling and starchy planes. If the bread is fantastic, this doesn't have to be a bad thing, but most sandwiches aren't made with the best bread in the world. The egg salad is especially disgusting as it tends to be about 50% mayonnaise and spread onto thin slabs of white bread as if it were a precious commodity and therefore must be used sparingly.

I won't miss the lackluster, anemic, and fairly tasteless sandwiches I could get in Tokyo.
Posted by Orchid64 at 8:00 AM