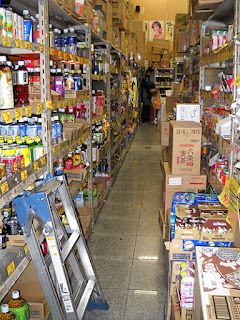 Yes, this is a store, despite the fact that it resembles a warehouse. Shops in Tokyo often optimize their display and storage space but putting open boxes of products in front of shelves or at the end caps, taking up valuable real estate that those annoying customers might take advantage of.

I've been shopping in a relatively smallish supermarket since returning to the U.S. My guess is that it has average to smaller than average aisle sizes. They are wide enough to accommodate two very large shopping carts plus allow a person to squeeze by them if they are parked on either side. In Tokyo, I'm pretty sure one really big cart would block most aisles and allow one trim person to pass through. I do know that it didn't take much for one or two lingering shoppers who had no consideration of others to completely cut you off in many cases and won't move even when you say, "excuse me," and make it clear that you need to pass by. Some get angry with you for even making them aware that you would like to get by. It also doesn't help that the shop workers also block the way.

I won't miss the narrow shop aisles in Tokyo and the frustrations that accompany them.
Posted by Orchid64 at 8:00 AM