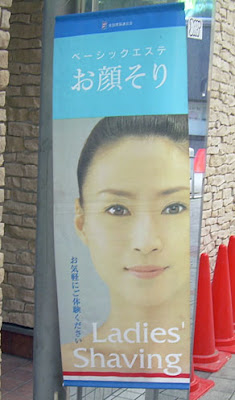 During my first few years in Japan, one of my coworkers told me something which surprised me. She told me that there were special disposable razors sold in Japanese stores for women, and I told her that that was no surprise as such razors are sold in the U.S. for women as well. That was no shock. The surprise was that these razors were for women to shave their faces. She told me that she'd learned from her female Japanese friends that Japanese women shave many areas on their faces including their foreheads. Western women try to hide the fact that they practice hair removal on their faces because it is seen as masculine behavior to remove facial hair and a topic of tittering jokes in popular entertainment.

I'll miss the fact that Japanese people have this mature attitude toward the fact that women also have facial hair as reflected in the open services related to removal of such hair.
Posted by Orchid64 at 12:15 AM