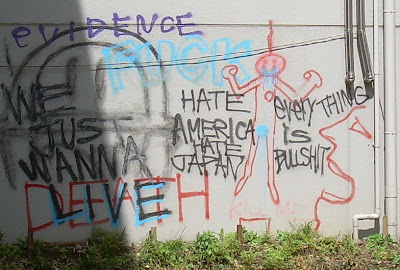 Almost all of the graffiti that you see in Tokyo is in English. It's very rare to see any Japanese characters at all. I believe there are several reasons for this. One possibility is that they feel more freedom to express themselves in a foreign language. Another possibility is that the vandals are either intentionally or unconsciously trying to distance themselves from their actions (which are criminal in Japan) or trying to mislead people into thinking a foreigner is doing these things. The chances that a foreigner is actually creating the graffiti are close to zero.

Whatever the cause, I don't like the fact that a criminal act, albeit a petty one, is linked to a language other than the one the criminal speaks as a native as I think it draws an unfair connection between crime and foreigners in the minds of the Japanese.
Posted by Orchid64 at 12:15 AM