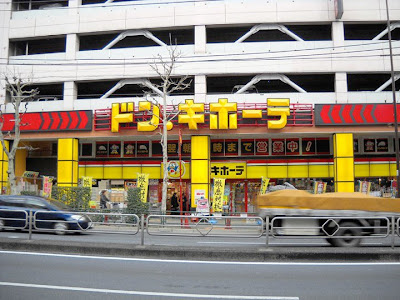 For those who can't read Japanese, the shop's name is "Don Quixote". I place the picture here tongue in cheek.
Most English speakers know the saying, "necessity is the mother of invention". This saying generally applies to technology, but it also applies to social changes. With only 2% of Japan's population being foreign, Japan has not had much in the way of necessity when it comes to the rights or treatment of non-Japanese. In fact, it is my profound belief that most Japanese people have so little experience in dealing with foreigners on a macro level (as opposed to a micro, or personal, temporary level) that they don't even know they are practicing discriminatory behavior in many cases when they do it. What they need, is time, education, and awareness, and now is a good time to start that process with Japan's native population shrinking steadily due to a low birth rate (less than 1.5% per couple) and the prospect of more immigrants. To that end, I think that Arudou Debito, who is often reviled by the foreign community and seen as Quixotic in the issues he pursues, is the first person to step up to the plate. I think assuming that position, whether all of his stances and conclusions are ones that I personally support 100%, is something of great value not only to the foreign community, but to the Japanese as well considering that they will certainly face a more varied ethnic mix in their population as time goes by.

I'll miss Arudou Debito, referred to disdainfully by foreigners who hold him in contempt as "the advocate", and the fight he fights for those foreigners who do and don't appreciate him and those Japanese who aren't yet aware that they need his efforts to help them more smoothly pave the road ahead.
Posted by Orchid64 at 12:15 AM