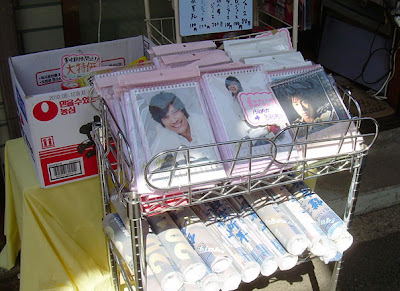 A local shop sells calendars featuring Korean idols.
Japan has had a long history of difficulties with Korea and the level of pettiness that is sometimes displayed in the media as a result of their troubled international relationship is often painful. The Japanese media criticize tiny things like the "uncivilized way" Koreans mix all of the ingredients of a dish into the rice so that all of the components can't be tasted individually. They also refuse to incorporate Korea's influence on their history into their textbooks because the idea that Japanese culture may have derived from anything Korean is anathema to them. At the same time, Korean dramas and idols are popular in Japan. The fantasy Korea has become rather hot, while the real relationship remains cold and childishly competitive.

I won't miss seeing this destructive relationship between Japan and Korea.
Posted by Orchid64 at 12:15 AM