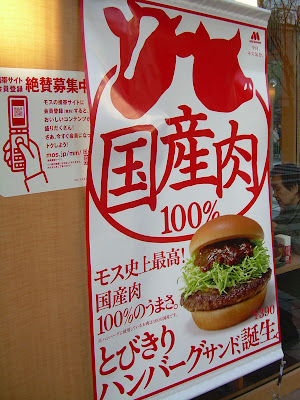 A poster at MOS Burger fast food restaurants that advertises the fact that their burgers are a pork and beef mixture, which appeals more to Japanese tastes than 100% beef burgers (which Western burger chains sell).
My husband likes beef. Personally, I'm not a fan of it, but I cook the occasional hamburger or ground beef-based recipe for him. The thing is that most (but not all) of the ground meat in Japan which isn't chicken is not 100% ground beef. It's a pork and beef mix so people like my husband who like to have a medium rare hamburger can't make one with this meat without risking trichinosis. In fact, he said that, in retrospect, he was probably eating partially raw pork during his first year in Japan (when he was alone and couldn't read Japanese) because he didn't know the ground meat sold at most markets is a pork/beef blend.

I won't miss having to cook to the demands for pork when I'm handling a beef recipe.
Posted by Orchid64 at 12:15 AM