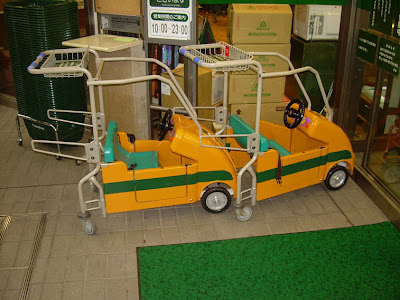 In the U.S., there are big shopping carts and you can seat your kids in a section of the cart. There were no carts which are small and specifically designed for kids to push around and load purchases into when I lived in the U.S. In Japan, at least a third of the supermarkets I frequent have the equivalent of a cart which is pushed around or primarily designed for the kid to drive (often alone). Some of them are miniature versions of a normal cart and others are specialized in other ways. The problem with putting a cart in the hands of a little kid is that they have no concern for where they are going or standing. They just want to zip around the store pushing the thing everywhere, and their parents usually exercise minimal restraint (and attention) while this is occurring.

While I'm trying to shop, these kiddie carts block my way constantly and the kids are reckless and I won't miss having to negotiate around them.
Posted by Orchid64 at 12:15 AM