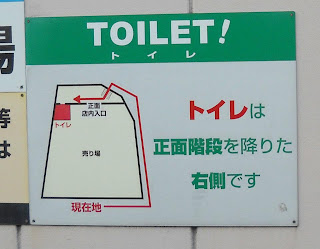 Some things are inexplicably exciting.

It's the little things in life which tend to matter most to those of us with the comforts of first world living. Our complaints are trivial, but they can detract from quality of life in niggling little ways. I took certain things for granted in Japan and one of those was that nearly every toilet door in public and private places had an indicator letting those outside know that there was an occupant inside. I'm sure they did this because most of the stalls had doors that went all the way down to the floor and people couldn't see feet inside. After returning to the U.S., I've learned to really appreciate the way the doors were designed because I've had multiple experiences going to public restrooms or those in private businesses like restaurants in which people walked up to the door while I was using the facilities and yanked on the door to see if it was locked. That, in and of itself, would not trouble me, but people don't pull once, find it locked and give up. They tend to aggressively yank on it three or four times before walking away.

I don't know why people in America feel the need to try and yank a locked toilet door open, but I find it discomfiting to be in a vulnerable position and have people act like they are trying to bust in on me. I miss the door design in Japan which allowed people to know a person was in the toilet without ever having to touch the door.
Posted by Orchid64 at 8:00 AM