Will Miss #472 - the pedestrian crossings 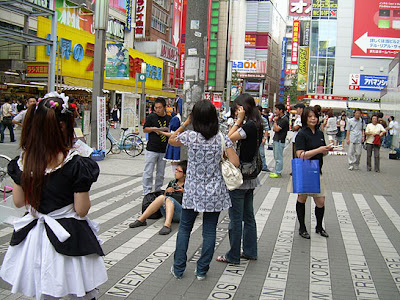 This is another one of those things that I had no idea was going to be something I'd miss until I'd left it behind. The cars in Tokyo are more aggressive with pedestrians than American (or at least Californian) cars are. In fact, as someone who just took her test to get her driving license reinstated, I can say that the law says, "yield,  yield, yield" when instructing American cars, and they absolutely do. However, the reason Japanese drivers are so aggressive and impatient is that the crossing lights in Tokyo last longer and change more often for pedestrians. Here, the lights are so short that if you aren't at the curb the moment the light changes, you're not going to get across. I've read that it is 27 seconds in California, but I've counted it and it seems closer to 21 in terms of the signalling. The streets are wider here and that's not much time to get across, trust me. I'm not a slow poke. It's just a really damn short time. In Tokyo, I could walk half the block to make a light that had changed if I sped up a little. It was positively luxurious compared to here.

Tokyo was much more pedestrian friendly when it came to facilitating crossing streets, and I miss not having to worry about missing lights or waiting forever for the "walk" light to go on.
Posted by Orchid64 at 8:00 AM