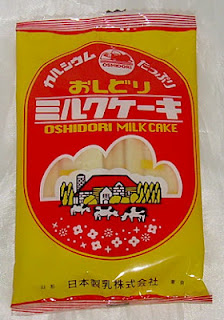 I read a cooking blog post recently which offered a recipe for "vanilla ice cream, because "plain" is not a flavor." In Japan, "plain" is a flavor, and it is not a good one. A lot of people see "milk" in Japan and believe it means vanilla, but what it really means is one of several things depending on the quality of the product. It can be condensed milk, regular milk, or, at the very bottom of the barrel, powdered milk. While I like the flavor of milk just fine, it's not the sort of thing which lends itself well as a flavoring. It's not that it is boring so much as concentrated milk flavor on its own tastes pretty funky, at least to my taste buds.

I won't miss buying food which is "milk" flavored and expecting something with vanilla because I tended to forget that white food (especially ice cream) in Japan didn't mean "vanilla."
Posted by Orchid64 at 8:00 AM