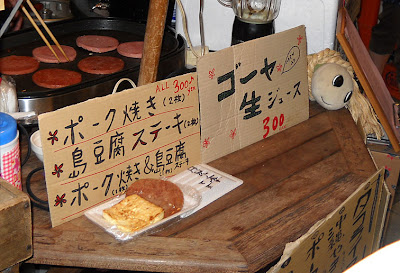 The sign on the right is offering goya juice. Note the blender behind it, which is empty of residue from creating goya juice. I don't know why anyone would think it would be profitable to sell it, but I guess there must be some sort of market out there for it.

"Goya" is the Japanese word for a bitter melon/gourd. It looks like a diseased cucumber in the incarnation it is commonly sold in in Japan. It's often used in dishes that are a specialty of the Okinawa region in Japan. It's also an acquired taste that I never acquired. In fact, many Japanese people never acquire it despite their higher tolerance than Americans for bitter food. Goya is supposed to be good for your health and especially helpful in summer for coping with the hot weather, but it was never a welcome sight for me in whatever dishes it was offered in.

People sometimes credit the consumption of goya with the long-lived nature of Okinawans, but, if I have to eat goya to live to be a hundred, I'd rather die a few decades earlier.
Posted by Orchid64 at 8:00 AM