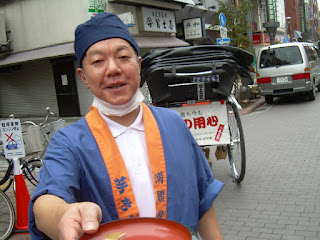 A man offering a free bean cake to my husband while he rode in a rikshaw in Asakusa.

There is an excellent Nepalese restaurant not too far from where I used to live in Tokyo. I made sure to go there several times  near the end of my stay and during one such visit, I wanted to order a particular special curry set of the day. I retracted a request for tea after I found out it wasn't included with the set and my husband just ordered one with his set (which did include it). When our meals arrived, there were two cups of tea and we were told the second one was "sabisu". Sometimes you'll go into a restaurant or a store and be given something for free, even when it didn't have an effect on your purchasing. It had nothing to do with a free sample. It was just an extra.

I realize that people are given freebies all over the world, but there was something uniquely Japanese and quaint wrapped up in that one word. For a country that often has byzantine paths to communication, it was this compact and efficient way of letting the customer know that this was their way of delivering extra service by giving you something for nothing. I'll miss hearing people say, "sabisu".
Posted by Orchid64 at 8:00 AM