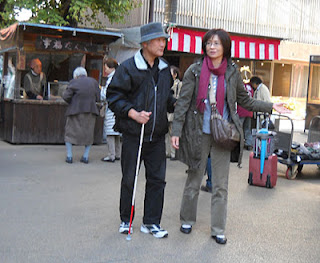 If I allowed comments, I'm sure I'd get a torrent of people talking about how the Japanese no longer surrender their seats to old people on trains and that the old style traditional respect has been vanishing. This would be true. However, in general, the Japanese still show more respect for the older members of their society than Americans as well as have more regard for those who are simply older than themselves. This is something I've been witnessing firsthand here and did so similarly there. On a family basis in particular, Japanese people seem to spend more time with and have closer relationships with their older relatives. They generally visit more often and have more meaningful contact and regard their older relatives as people of value. This is due in large part to Confucianism, which forms a big part of the backbone of relationships in Japanese culture. In the U.S., many young people after exiting the innocence of childhood have little interest in anyone older than them and live life as if aging translates into becoming boring at best, and, at worst, older folks are often viewed as either a resource to tap, or a burden to tolerate.

On an individual basis (as opposed to a society-wide issue), the Japanese still show a good deal more respect for the elderly and regard for people who are older than them than those in America and I miss that.

*Note that while I'm making this post based purely on my subjective experience in Japan, a study conducted between Americans and Koreans in regards to respect for the elderly showed that the only point on which Americans showed more regard for older folks than Koreans was in physical contact upon greeting (e.g., hugging) and this is likely a cultural difference as Americans touch more than many Asian cultures. Koreans are actually more respectful of the elderly than Japanese, but the study I read indicated that Americans are very low in their actions that show regard for the elderly in terms of nearly all other points (language, physical and verbal care, respecting or heeding advice, etc.).
Posted by Orchid64 at 8:00 AM