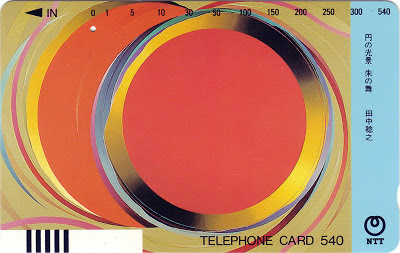 One of the popular things that all of the old fogies on Facebook enjoy doing is posting a picture of some anachronistic item and asking people if they recognize it. When I say "old fogies", I mean people who are my age, because those who are a lot older than me aren't doing the Facebook thing beyond some modest cyber-stalking of their relatives. 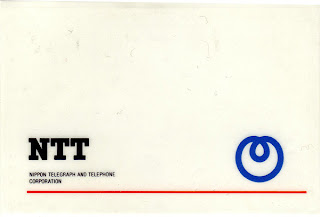 Phone cards came in little plastic sleeves to keep their faces from getting scratched and to keep them clean for collectors.

Seeing these things makes me wonder how long it takes for something to become an anachronism. I know that I was in Japan for a long time, but it feels strange to have items in my memory book from 1987 which are on the edge of obsolescence. What is more, it is odder that things which were fairly new technology when I first visited there are barely available or used in 2012. Phone cards were introduced in 1982, and they were sufficiently sleek, new technology in '87 that not all phones not accepted them. I distinctly remember having to hunt down phones that took cards.

Incidentally, and this is an interesting bit of history, the Japanese businesses did not decide to jump headlong into new (pre-paid card) technology because they were so forward thinking and cared about customer convenience. The truth is that switching to cards put NTT (and the subways and train lines) in a position of having to create and install a lot of new hardware. While the cards may have reduced the number of personnel who needed to maintain devices, as someone would need to remove the coins from them much as they have to do with vending machines, it's unlikely that any reduced staff expense would make up for the enormous cost of the new hardware. The reason that they started using the pre-paid phone card system in Japan was that there was a coin shortage and this was a good solution. 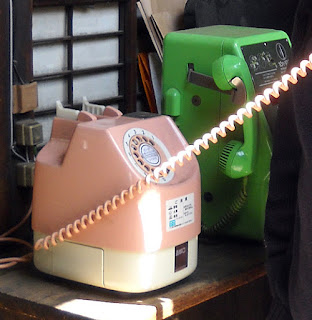 Back in those days, phones were different colors to help you visually recognize the modern ones from the older style ones. There were squat little pink phones that only took 10-yen coins. Pay phones in general, even the green ones that take 100-yen cards and phone cards, are disappearing in Tokyo in 2012. The pink ones are nearly extinct. I wouldn't be surprised if those who are younger than 20 have never seen one.

When I left Tokyo, there was one of those old pink babies at Yasukuni shrine and nowhere else that I visited in my last few years (and I visited a lot of places) in the capital. I guess feeding in 10-yen coins every minute (as it costs 10 yen per minute for a local call) is not something most people are willing to do. Perhaps Yasukuni still has one to accommodate the older folks who tend to go there, or no one has gotten around to troubling themselves to remove it.

Phone cards used to be collector's items and NTT sold them in vending machines outside of their offices. It was interesting to walk by and look at all of the designs. Unfortunately, I don't have shots of those huge machines with their plethora of designs, but I do recall that scenic vistas and cute animals were common. 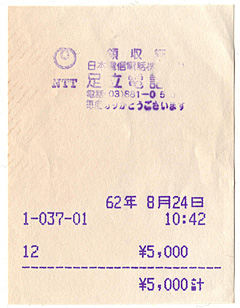 My now-husband, then-boyfriend, had to pay an exorbitant amount of money to call me in the U.S. and he didn't have his own phone so he would buy the biggest value phone card he could afford in order to conduct a conversation of any reasonable length. The above is a receipt for a 5000 ($63) yen-card that he bought in order to call me on my birthday. I don't know what it cost per minute back then, but I do know that it cost me about $1 per minute to call him from the U.S. at that time and I could call him more cheaply than he could call me. (Note: Since writing this post initially, I have learned that he was able to talk to me for 34 minutes, which means it cost about 150 yen per minute which at that time was a little over a dollar a minute.)

If you look at the card pictured at the top of this post, it is the very card that he used to call me on my birthday in '87. You'll note that it has "540" units on it. That means that he got 5,400 yen ($67) worth of calls for 5,000 yen. By Japanese standards, that was actually a fairly big discount. Holes punched in the cards marked the points at which they were used to let you know how much you had left. The fact that this has one hole only punched at "0" means he used the entire value of the card at once to call me.

The cool thing about my memory book is not that I have a bunch of stuff from 1987-88 that is uncommon in Japan at present, though that is certainly an interesting thing. The greatest thing is that these items tell a story in a way that modern technology, like a call or chat log, likely would not. That card reminds me that my boyfriend spent a lot of money to call me on my birthday, and did so in the heat and humidity of the Tokyo summer to do it. That little hole punch tells me that he used every yen he had to spend as much time as possible on the line with me, which reflected just how precious communication with me was to him. Any memento that can stir that kind of memory is a valuable one indeed, even if it is just an old used-up phone card in the eyes of others.
Posted by Orchid64 at 8:00 AM