Will Miss #502 - the censorhip of adult movies 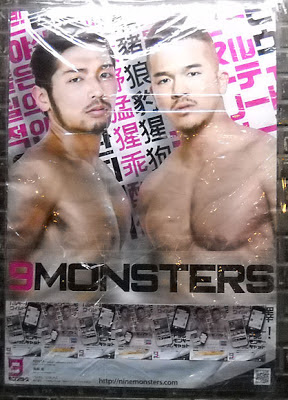 I have to confess that I did not see this particular adult film, and that it was not exactly as commonly advertised as some of the ones featuring women.

Everybody knows that pornography is censored in Japan. Everybody doesn't know that it is utterly incongruous in a country in which pornographic movies are openly advertised in heavily trafficked areas of big cities and businessmen feel free to look at dirty magazines in open view of everyone on trains. You can see women's boobs openly displayed on a new stand, or a sex act drawn in a Japanese comic book, but it's someone's job to go through every imported issue Playboy and scratch out all the hairy bits lest it contaminate the culture in some perverse way. It's also a bit strange considering the relatively liberal thinking that people hold about sex in general. Japanese porn movies similarly have the naughty bits fuzzed out, but it's perfectly legal for men to frequent "soap lands" in which women ostensibly give them baths and realistically perform sexual services.

Censorship of nudity and pornography in Japan is like Altoids mints, it is curiously strong. It is part of the way in which opposing ideas seem to harmoniously exist in the culture and display an odd irrationality that no one questions which I regard as uniquely Japanese. I miss this glaring example of unresolved cognitive dissonance.
Posted by Orchid64 at 8:00 AM