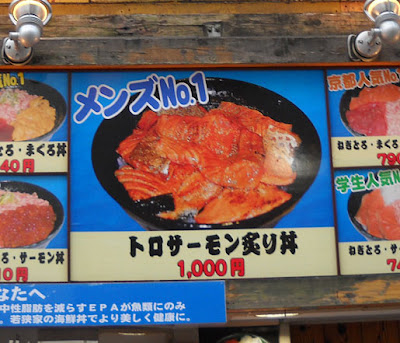 The Japanese at the top says "men's No. 1", which seems appropriate since men are clearly #1 in Japan.

The area that I live in in California right now has a bigger than average number of Asian folks. In fact, there is a church near me which is a Japanese one that conducts services in both English and Japanese. I'm guessing this is why there is a Daiso Japan near me as well as Nijiya Japanese market, not to mention about a million Japanese restaurants. I think they are here because this is where the customer base is.

To that end, I'm much more likely to encounter Asian males and possibly Japanese ones in particular in my area. That being said, I have not run across many Japanese folks at all. The first time two guys in business suits blew by me in a shopping center and I overheard their conversation, I actually grew teary. That doesn't actually relate to the topic at hand in any concrete way, except to say that I do have some extremely sparse and limited contact with Japanese men in my current location.

So far, however, only one of these transplants has done anything like I encountered in Japan. There, men navigated the world with a sense of utter entitlement that didn't just border on rude, but overtly displayed bad behavior, repeatedly. They didn't do this because I was foreign, but because I did not possess the proper genitalia to have the right to go onto a train first or to not be cut off when they wanted to be in front, even when I was at the head of the line or the space was too narrow for a person to reasonably pass by.

I have found that men in America do not naturally barge ahead, push me aside, take up more than their fair share of space, or assume they should be treated deferentially. In fact, people in general are more likely to yield to others regardless of gender and this sort of courtesy was rarely displayed by men in Japan. I absolutely do not miss the level of arrogance displayed by older men in Japan, and have only seen it once here when an older Japanese man rudely barged by me and walked ahead of his female companion (likely his wife) at a pace which clearly made her uncomfortable.
Posted by Orchid64 at 8:00 AM